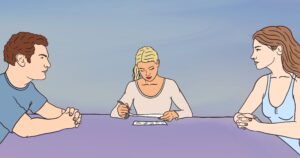 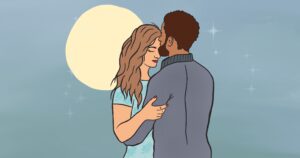 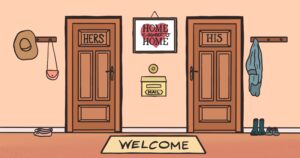 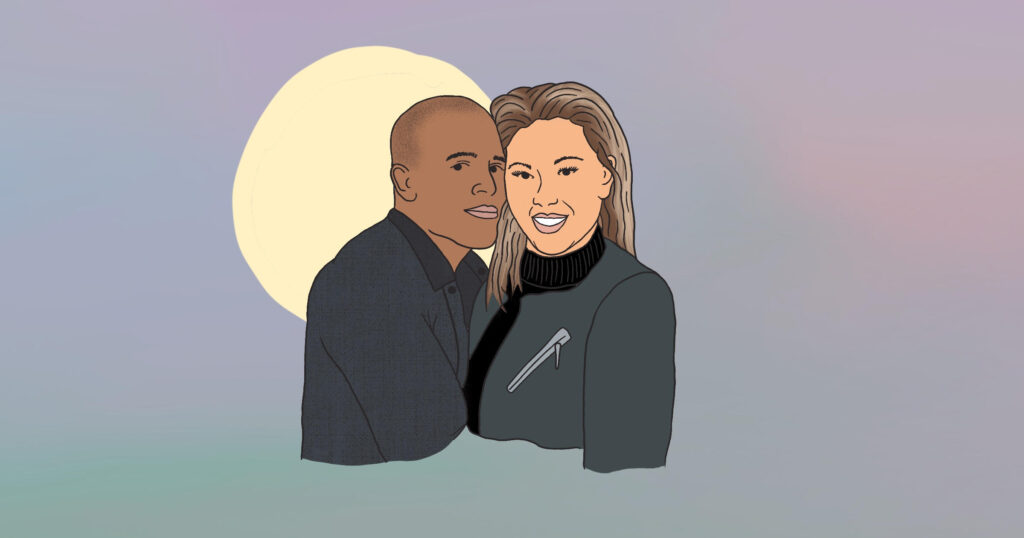 Marina and Jerry Randolph didn’t initially give much thought to the videos they posted on Instagram. In the footage, the exes were just doing what came naturally to them, which was driving in the car side by side while singing and bopping to the music together. It didn’t matter that they’d been separated for nearly two years after being a couple for 26 years, and married for nearly two decades. What mattered was that they could still have a great time together, and they thought it would be funny for people to see that. So Marina uploaded the videos of them rocking out, and wrote:

The social media posts turned out to be more than just funny: They went viral, garnering tens of thousands of likes. So, how did this California-based ex-couple, both 49, manage to get to this loving, happy place? We asked them to explain!

Marina: We think it’s hilarious that the video went viral, but we’re used to being viewed as unconventional. When we started our relationship at 21 years old, we were living completely different lives. I had just finished college when I fell for Jerry (who everybody calls “Flo”). I grew up in a very proper Asian family, and I was about to enter the corporate world as a marketing executive, which I am now. Meanwhile, Jerry hadn’t been to college, he was a professional dancer traveling the world, and obviously, he was not Asian—he’s Black. No one ever thought we would make it this far. But we didn’t listen to anybody’s opinion of us then, and we’re not worried about people’s opinions now.

What’s important to us is that we know we’re still family, even though we don’t share the same bed anymore. We have two amazing kids—our daughter Kira, 17, and our son Kai, 13—and we view the life that we built and the marriage that we had as something to be celebrated.

Jerry: I feel the same way, but we’ve been on a long journey to get here. When we first met at one of my shows in Los Angeles we had an instant connection, both physical and emotional. And for eight years, we dated and each had the freedom to do our own work. It was great. But after we got married and had our daughter, Kira, life had to change. Because Marina was making the most money, I quit my job, which at the time, was touring and dancing with Usher, to stay home for a year and take care of Kira. At first, everything was cool. But things started to shift as my wife moved up the corporate ladder at work and didn’t know how to turn it off at home.

Marina: I was the boss at work and also kind of the boss at home because the pulse of the family revolves around the mom. I think that just tilted our dynamic too much, and resentment started to build on both sides.

Jerry: I’m partly to blame too because I should have told her earlier that I didn’t like her bossing me around. I let her do it. But I was losing myself. Even after we found childcare and I was able to go back to work, my jobs were inconsistent, and I felt like Marina was taking care of three kids—our two kids and me. Eventually, it got to the point where I didn’t like who I was becoming.

Marina: I think our marriage was kind of like death by a thousand cuts. There wasn’t any infidelity or abuse, or any big thing that punctuated the end. It’s that we’d been together our entire adult lives, while we were learning about ourselves and growing up, and there’s probably a lot of dysfunction that we played out on each other.

Jerry: Things really turned a corner for me when Covid came. Between the pandemic, the Black Lives Matter protests, and being stuck at home, the whole world stopped. During that time I realized I couldn’t live like this anymore, so I found an apartment and moved out.

Marina: Looking back, I can see that he was dying and I was dying—and I was just too focused on the hamster wheel and the rat race of life to even see it. But at the time, when he moved out, I was heartbroken and felt abandoned and angry. For six months I was on the kitchen floor, face down, crying while my friends were bringing me Xanax, trying to peel me off the floor.

In my mind, I’d been doing the work to bring in the money, I’d been handling all of the kids’ school stuff, and then my husband left me! What was I working so hard for if I was losing my family?

So I resigned from my job to focus on the kids and myself. I took a whole year off, which I was able to do financially, and went from being angry to being introspective. I really tried to dissect what I was feeling, and I realized that I wasn’t mourning the end of our twosome so much as I was mourning the loss of our family unit. Once I got clear about separating those two things, it became a lot easier for me to get along with Jerry, and even to love him for the friend and father he is.

Jerry: We really made it a point to put the kids first. I knew how it was with my mom and my dad being separated, and how my mom made us hate my dad, and I didn’t want that for our kids. Ever. I knew we had to be good to each other.

Marina: I know it’s a little unusual but we don’t have a formal custody arrangement or even immediate plans to get divorced. Our priority is how the family is functioning day to day—and so far, it’s going really well. Early on, we made the decision that we didn’t want to be in litigation and dividing up custody of the kids right before my daughter went to college. Nor did we want to do a division of assets and cause upheaval in a 13-year-old boy’s life. What we wanted most was that the kids feel like they have their mother and father as much as possible.

Jerry: Generally, during the week, the kids live with Marina in Manhattan Beach, Calif., where they go to school. On the weekends, they come to me in Irvine, where I work, or I go to them and stay at their house, which Marina encourages so that the kids can be with me. Next year, when Kira goes to college, she’ll be in Irvine so we’ll be able to see each other even more. I would rather spend time with my kids than anything else, so whenever I’m needed, I’m there.

Marina: It works for us, so I’m in no hurry to involve lawyers. I’ve talked with enough people who spent hundreds of thousands of dollars over three to five years to get divorced. I don’t want to walk down that pathway.

After all, even though it took me a while to recognize it, Jerry did me a favor by moving out. I hadn’t realized that I’d sacrificed everything I love to do because I was working 50 to 60 hours a week and had no time for myself outside of the family. Now, I work part-time, and because the kids are at ages where they don’t need us as much physically, I’ve had the space to reinvent myself. I’m discovering every day what I’m passionate about. It’s been a time for renewal.

Jerry: For sure. I wouldn’t be the person I am now if I hadn’t left. In this time, I got a great job as a boxing trainer, I’ve grown and learned from my mistakes, and I’m finally figuring out how to be the man I want to be.

Marina: Some people might not understand our attitude, and I know it may not work for everyone, but I would recommend to other people getting divorced or separated that they try to look at the positive aspects of their marriage rather than the negative. It makes it much easier to appreciate the other person and to heal. And it frees you to view the next phase as a chance to work on yourself, explore your sexuality, and get in touch with what you want out of life.

Rachel Rabkin Peachman is a journalist specializing in health and family. Her work has been published in outlets including The New York Times, Consumer Reports, Parents, and Glamour. She is the co-author of “When Children Feel Pain: From Everyday Aches to Chronic Conditions” (Harvard University Press, 2022).

One Woman’s Guide to Feeld, the Alternative Dating App

Worried About the Effects of Divorce? Here’s Why It’s a Chance to Feel More Empowered

Join the discussion! If you’re separated or divorced, did you have an amicable uncoupling? Or did you have a tougher time ending your marriage (and feel like those who do it without lots of fighting are like magical unicorns)? Whatever you experience, we’d love to hear from you here.